Present a specially filmed recording of

playing and talking about an eclectic programme of lyrical music

Available from 5pm, Thursday 27th May

followed by a live Zoom conversation with Darragh and Mary at 8.15pm

(The recording of the concert will be available until 24th June)

The Lone Seafarer by Sally Beamish 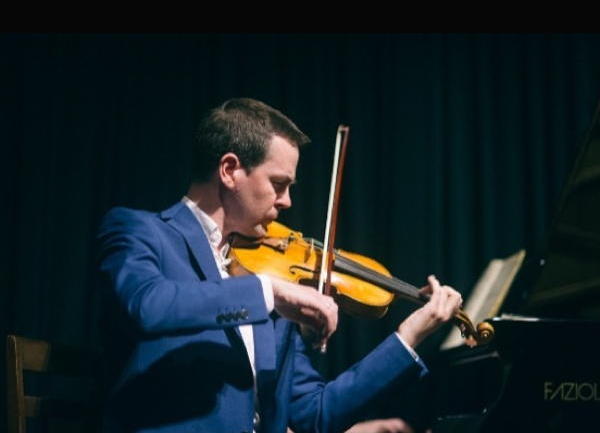 As a highly active and renowned interpreter of contemporary music, Darragh has collaborated with many of the most important composers of our time, in particular Arvo Part, Philip Glass, John Tavener, Kevin Volans, Michael Nyman, Gerald Barry and Michael Finnissy. He regularly leads London Sinfonietta, and has also guest-led Ensemble Modern, Musik Fabrik, Birmingham Contemporary Music Group, Remix Ensemble (Porto) and Athlesas Sinfonietta (Copenhagen ). Darragh was violinist with the Smith Quartet from 2005-2011 and previously Artistic Director of Barqoue 2000 in South Africa. From 2009-19 he was on the violin faculty at Royal Welsh College of Music and Drama and has given masterclasses at Curtis Institute, Peabody Conservatory, Central Conservatory Beijing and YST Singapore.

Darragh has recorded over 50 albums for Naxos, Resonus, NMC, Metier, Delphian and Signum. He plays an 1848 Giuseppe Rocca violin, generously on loan from The Morgan-Rocca Instrument Trust (administered by The Royal Society of Musicians) and a fine bow made by Alfred Lamy.

Mary was the curator of Soundings (an annual UK/Austrian collaborative music festival) at the Austrian Cultural Forum London from 2008 to 2016. She has served on the jury of ‘Schubert und die Musik der Moderne’ International Chamber Music Competition in Graz, Austria. In 2014 she founded 'Chamber Music on Valentia' an annual chamber music festival in Co. Kerry, Ireland, with the aim of bringing chamber music performances of international standing, innovative programming and outreach and engagement programmes to this unique place.